MDRNormsRegulatory Affairs
The past year was exciting: It has kept medical device manufacturers on their toes with the implementation of MDR requirements while IVD manufacturers have also had to overcome some hurdles with the introduction of Regulation (EU) 2017/746 (IVDR) and, for example, update the technical documentation of their in vitro diagnostic devices. Due to the completed Brexit (affects UK) and the end of the Mutual Recognition Agreement (MRA) with Switzerland, both European neighboring countries have effectively become third countries. This complicates the regulatory requirements for medical devices and IVDs to be placed on the UK market and in Switzerland.How will things look in 2023? This year, in our blog posts, we will take you again on a journey through the most important topics in the medical devices and IVD industry. In this post, we give you an outlook on regulatory affairs topics that are already burning issues this year.

The MDR and the new transition periods

Where are we coming from, and where are we heading? At the EPSCO (Employment, Social Policy, Health and Consumer Affairs Council) meeting on June 14, 2022, health ministers expressed their concerns: the existing serious challenges related to the implementation of Regulation (EU) 2017/745 on medical devices (MDR) threaten the continuous availability of certain medical devices needed by health systems and patients, while the access of innovative medical devices to the EU market is at risk.This was followed by another meeting of the EPSCO Health Council on September 12, 2022, in which the EU Commission was also involved. The EU Commission took the concerns of the member states and the Notified Bodies seriously and presented those regulatory aspects that are likely to be included in an amendment to the MDR/IVDR.This may concern the following points:
Following the EPSCO Health Council meeting, the new MDCG position paper "MDCG 2022-18" was published in December 2022: on the application of Article 97 MDR to legacy devices whose MDD or AIMDD certificate expires before an MDR certificate is issued. This MDCG document specifically addresses the bottlenecks faced by Notified Bodies that result in delays in issuing MDR certificates and thus non-compliant devices (as the MDD/AIMDD certificate has expired).The aim of MDCG 2022-18 is to ensure the continuous availability of medical devices on the EU market that are necessary for healthcare systems and patients. The MDCG position paper includes information on how the certification bodies intend to apply Article 97 MDR in a legally sound, coherent, and consistent manner.MDCG 2022-18 applies only to legacy devices that fall within the scope of Article 120 (3) MDR and for which the MDD/AIMDD certificate expires or has expired prior to the issuance of the required MDR certificate(s).

Swexit - the developments after the end of the MRA

What is really coming and what might still be changed? We keep an eye on the developments around the MDR and IVDR as well as the regulatory requirements in Switzerland and the UK for you.We will report promptly as soon as we hear anything new.
We would be happy to actively support you in the upcoming regulatory challenges for your IVDs or medical devices!Best Regards
Bruntje Schmidt
Back to overview | Next »

State of the Art: How SOTA affects the product life cycle of medical devices and IVDs 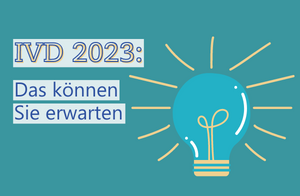